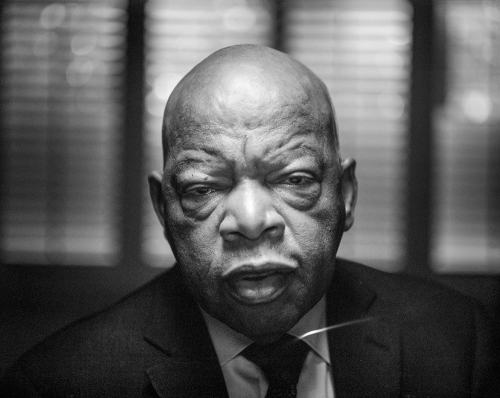 John Lewis was elected to Congress in 1986, and since then has served as Representative for Georgia’s 5th Congressional District. He holds several leadership positions in the House, including Senior Chief Deputy Whip for the Democratic leadership, and as a member of several subcommittees of the House Ways and Committee and as a member of the Congressional Black Caucus. He earned degrees from the American Baptist Theological Seminary and Fisk University, where he began his career as a civil rights organizer in 1960 during the Nashville sit-in movement and as a Freedom Rider. He helped plan and was a keynote speaker during the 1963 March on Washington for Jobs and Freedom, served as the chairman of the Student Nonviolent Coordinating Committee (SNCC) from 1960-1963 and rose to national prominence after he and Hosea Williams led the 1965 Voting Rights March from Selma to Montgomery, where he and other peaceful protestors were attacked and beaten on the Edwin Pettis bridge. His commitment to civil rights and social justice has been the hallmark of his career, and he has received multiple national and international awards for his work, including the John F. Kennedy “Profile in Courage” award, and a National Medal of Freedom from President Barack Obama in 2010.  He has written multiple best-selling books and continues his work in Congress and as a human and civil rights advocate.